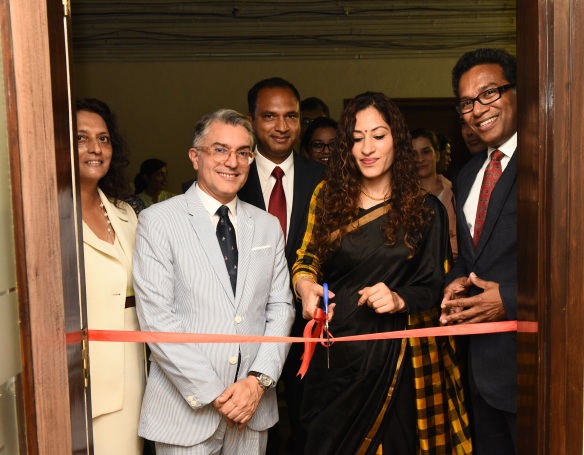 PIB Hub will act as a bridge to facilitate trade between the countries of India and Portugal with the setting up of the Goa Desk of the Portugal India Business Hub. It will facilitate entrepreneurs to venture into India through Goa and assist Indian companies to venture into Portugal and other Indian diaspora markets.

The Goa Desk of Portugal India Business Hub, the first of such centers to be set up in the country was inaugurated in Panaji at the hands of Her Excellency Mrs. K. Nandini Singla, the Ambassador of India to Portugal in the presence of the Consul General of Portugal Dr. Rui Baceira and other dignitaries. This was in concurrence to the exchange of MoU between Mr.Darryl Pereira, CEO Reira Group and Dr. Abdool Karim Vakil, Chairman PIB Hub, in the presence of the Hon. Prime Minister Narendra Modi and Prime Minister António Costa.

Said Mrs. K. Nandini Singla, the Ambassador of India to Portugal at the inaugural ceremony, “I’m delighted to be here this afternoon as this is a dream come true for me. Darryl Pereira and Altino Alvares have made this dream a reality today. Ever since 1974, the relationship between India and Portugal has been wonderful. The only element lacking was a hub of this nature. We are filling that gap today. This is a golden moment in the relationship between the two nations. PIB Hub has laid the foundation for businesses to look at wider opportunities in India as well as in Portugal. The last year has seen visits of both Prime ministers, 20 MoUs have been signed to facilitate knowledge and technical exchange and the countries are exploring collaborations in the areas of technology, culture and sports. Portugal and Goa already share a 500-year-old partnership, let’s look forward to the next 500 years in the future.”

Dr. Rui Baceira, Consul General of Portugal added, “Goa is a special place. Portugal and India are modern nations and have been collaborating together. The opening up of a path, a window of opportunity for business and trade was critical which was done today with the inaugural of the Goa desk of the PIB Hub. “

Said Darryl Pereira, Vice President PIB Hub, “India and Portugal are home to a vibrant start-up community, many of who would like to venture into new markets in India and Europe. PIB Hub will act as a bridge between the two countries and provide assistance in various forms including hand-holding to entrepreneurs.”

PIB Hub is currently working with Agência para o Investimento e Comércio Externo de Portugal (AICEP) (which is a Portugal Global – Trade & Investment Agency) in the development of direct commercial (trade) relations between India and Portugal and implementing measures to achieve a balanced bilateral trade in between two countries in all sectors of the economy.

Altino Alvares, Executive President PIB Hub, said “PIB Hub aims to become the main business channel through which Indians and Portuguese establish businesses that add economic, environmental and social value to Portugal, India, and their overseas communities, in a bilateral and multilateral perspective. PIB Hub is developing the synergies vibrant markets from India and Portugal.”

The PIB Hub and The Indian Chamber of Commerce signed a MoU to promote the economic exchange in the area of Trade to India and Portugal. The principal focus will be in areas such as renewable energies (solar and wind), construction, infrastructure (roads, ports, airports), defence (‘Drones’, robotics, cargo planes), food processing and logistics, tourism, hotel and real estate

celebrate the biggest festival of Lord Krishna in Europe at RadhaKrishnas own land by admin started at 07 August,2022

The 8th National Handloom Day is going to be celebrated on 7 August 2022 by admin started at 07 August,2022

Celebration of Independence Day of India at Bhavan London today by admin started at 07 August,2022